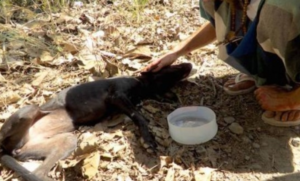 In order to locate an extremely shy cream-colored stray dog that she had observed for the previous week, Tania Cappulleti headed out on a scorching hot Sunday in Costa Rica.
Despite not finding the dog she was initially looking for, Tania did discover another that was in utter need of rescue. 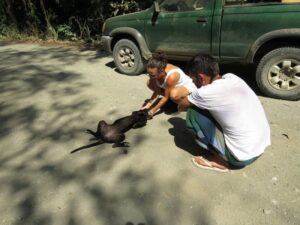 Tania pulled her car over for a black, malnourished puppy that was sitting by the side of a sandy road, miles from any settlement.
Tania told BarkPost that she had the same initial reactions to this dog as she would to every stray.
“I always think, ‘Oh no, poor baby,’ when I see a stray, and that was the same thought this time.
Her thirst must be so great.
I halted without pausing.
She was incredibly lucky because we were already on a rescue mission and had water and dog food in the back of my truck. 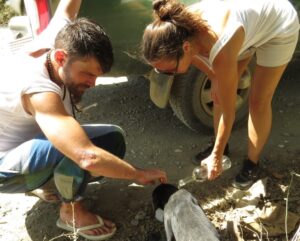 As soon as Tania approached this sweet pup, the dog fell onto the road, crying. 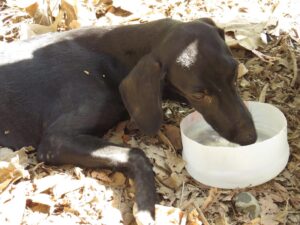 Upon further inspection, it was discovered that not only was this discarded dog covered in fleas and ticks, she was also extremely dehydrated. Her condition didn’t deter her from expressing her gratitude to her rescuers.
“She was so sweet and gentle, we all fell in love with her right away!” 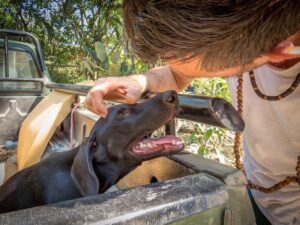 Small amounts of food and water were given to the puppy, which they named Gaia, by Tania and the two volunteers who were with her: Blendan Thomas and Olivia Mocillo.
It appears that saving Gaia couldn’t have happened at a better moment, as Tania stated to BarkPost:
We moved her into the small amount of shade that was available on the side of the road and gave her water.
She drank endlessly, but she couldn’t stand up because she was too weak. 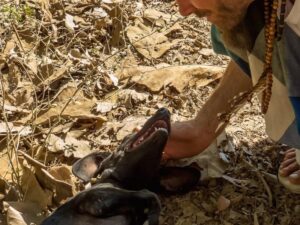 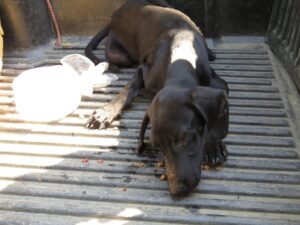 Tania, it should be noted, is a co-founder of Charlie’s Angels Animal Rescue, a “foundation that offers temporary care and residence for abandoned dogs in extreme physical condition or who are victims of abuse.”

After Tania rescued Gaia, she was transferred to a foster, who originally agreed to take the cream-colored dog that Tania began searching for. When Tania arrived at the foster home with Gaia in tow, there was some confusion.

“They were a bit surprised because they expected us to show up with the cream colored Labrador. We checked with them beforehand if they would foster the Lab. When we showed up with Gaia, they were like, ‘What? We thought it was a cream-colored dog?’ I said, ‘Yeah but now we found her instead.’ They said no problem, we [will] take her as well.” 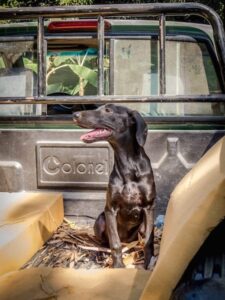 Gaia was then taken to the vet, where it was determined she didn’t need much medical care despite the condition she was found in.

“…[W]e gave her flea drops and took all the ticks out of her. When she got to the vet she just needed de–worming and vaccines. She is a super healthy young girl!” 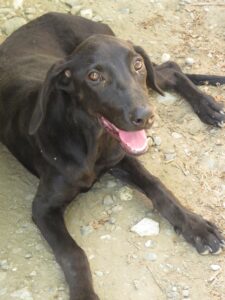 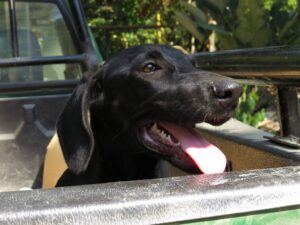 Gaia ended up spending five weeks in her foster home before her new mom, Johanne Froment, saw her photo posted to the Facebook page of Osa Peninsula Rescue and Adoptions, a Costa Rican organization that offers spay and neuter services as well as adoption services. 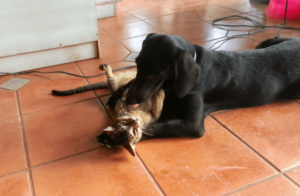 Now Gaia spends her days playing with her new mom, her two cat brothers, Tigré and Sacha, and enjoying her favorite past time – going to the beach.
“Gaia[‘s] favorite activity is to [go] for a walk to the beach. [J]ust seeing the leash she start[s] jumping and mak[ing] funny noise[s]….[S]he really like[s] being hug[ged] in [the] water [so] she can stay there for a long time.”

“Gaia [has] a very nice personality! [S]he is very social and always want[s] to play!…She like[s] to be pet a lot. I think she is very happy with us now.”

To support Charlie’s Angels in their mission of helping the dogs of Costa Rica, you may donate here. Both Charlie’s Angels and Osa Peninsula Rescue and Adoptions have Facebook pages which you can ‘like’ to follow along with the animals that they serve and rescue.