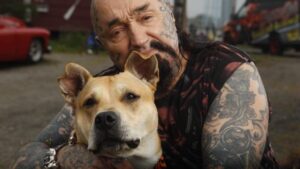 Not every hero wears a mask. Angels doesn’t look pretty, you might say about these tattooed bikers.However, they saved countless animal lives all over the country. They even set up an organization, Rescue Ink, and their main goal is to save as many animals as possible. They investigate cases of animal abuse, save pets from their violent owners and help the animals to find new homes!

Rescue Ink is a non-profit organization who fights for animal rights.

Their organization, Rescue Ink, has saved numerous lives so far,  and they won’t quit until the number of cases of animal neglect and mistreatment is very low,  hopefully zero.

But these animals advocates aren’t all bikers. There are bodybuilders, former military members,  police officers and detectives, and even lawyers among them.

They not only save animals from the bad conditions they are living in, but also make sure to find each and every one of them a new home. 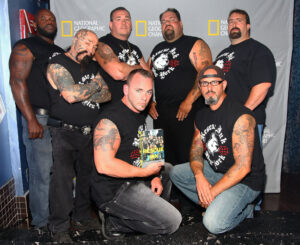 “Some people like to think of us as superheroes. The truth is, we are super animal lovers. Through the years, and through many caseloads, obstacles, and downright challenges, we remain strong and dedicated to our mission,” they said.

They made agreements with animal shelters and public organization and they cooperated with the authorities to reduce and even stop animal abuse. Regular people and even famous artists joined their cause. So far, these kind people managed to offer a much better life for a lot of animals, as dogs, cats, horses, pigs and even fish. The team only investigate cases of animal abuse. If the things goes in different direction, they call the police. “We specialize in getting the abuser away from the dog. We truly work with the abuser. We go to a house; if it’s really cold out, we see two dogs in the back, we build them a doghouse,” Mr. Missari, a member of the team told NY Times.

Above all things, the most important one is that all of them are so kind-hearted. For example, on of them had to carry a little kitten for 10 days, everywhere he goes, because the little one needed to be feed every 2 hours. And when those heros don’t save animals, they’re teaching children to be kind and lovely with animals. They actually try to prove and to teach everyone that animal abuse is so wrong.

These guys are real heroes.