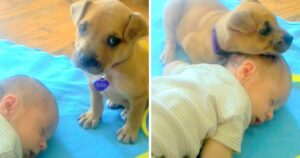 After being tethered to a fence and left by her owner, Callie the puppy was terrified and pleading for rescue. A compassionate man heard her dejected whimpers and chose to save her and bring her home.

In this video, Callie’s heartfelt response in her new house is captured. The man tells Callie to take a nap while sitting next to his sleeping child. Callie is certainly exhausted and weary after spending days by herself after being abandoned.

She can’t sleep because she keeps falling over since she is so sleepy, and she is afraid of getting dumped again. Callie ultimately gives in to sleep when she can’t keep her eyes open any longer, but she does it in the most cutest way imaginable.

We observe Callie cuddling up to the child and sleeping on top of him in a sweet moment! She finally falls asleep peacefully as the baby’s presence calms her anxiety. It appears that the puppy and infant have just made a lifelong companion! You’ll have a big grin on your face after watching this video!

Click the video below to watch Callie as she tries to fight the dreaded sleep in her new home!