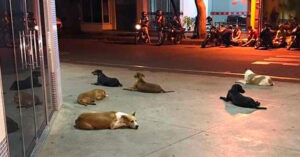 There is no shortage of tales about the loyalty of dogs,and heartwarming snaps like these prove just how affectionate they are!

Luiz is a homeless man. He lives on the streets of Cianorte City in Paraná, Brazil,and he has been homeless for 20 years. Luiz has been diagnosed with psychiatric problems, but he refuses medical help. He lives on the streets alone, but he is never lonely.He has many friends who accompany him, and some of his friends are a dog family who follow Luiz everywhere he goes.

One night, Luiz suffered a stroke and had to be rushed to the hospital. The dogs chased the ambulance, and once Luiz was taken inside,six dogs waited outside the Santa Casa Hospital 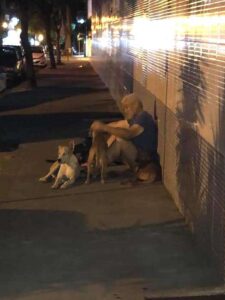 The dogs could be heard crying and howling from the entrance. After a while, they laid on the ground, refusing to leave.

It was a touching scene for those at the hospital. The dogs patiently waited for Luiz, staying there for hours. 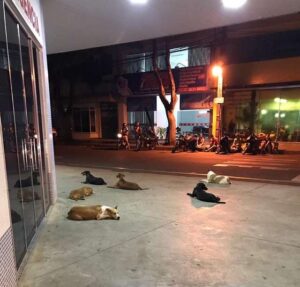 Only, next day in the morning, Luiz was released from the hospital, but he got out on a different door – without knowing his loyal friends are waiting for him. “The dogs were desperate,” Simone Ziliane, a volunteer with Amigos de Patas Cianorte told Brazilian publication G1. “On Thursday morning, when Luiz was discharged and left with his brother through another door,the dogs remained at the hospital entrance. One of the volunteers from the NGO had to fetch Luiz at his brother’s house and take him to where the dogs were for them to leave the front.” Ultimately, Luiz and his caring friends have been reunited.