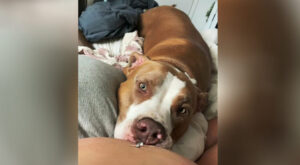 In this story, Goose is a charming rescue dog who adores his owners unconditionally. Since they have been providing him with the love and care he requires ever since they got him, the dog always makes sure that his new family is secure. When he learned that his mother was pregnant, he instantly became quite protective.

Goose’s mother noted that it was obvious that Goose was aware of something going on with her, but he only realized she was pregnant when he noticed her belly moving.

The mother was rather nervous about Goose’s response, but he handled it far better than she had expected, growing closer to her now that he knew she was pregnant ! 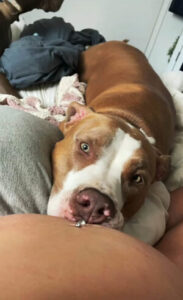 The adorable dog was kicked from his mother’s belly while he was lying his head on it one day.

The dog’s response is indescribable! He was experiencing about a hundred different emotions at once! It was one of the nicest things ever, and thankfully it was all captured on tape! See the video down below.