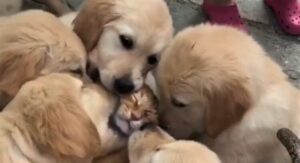 This adorable scene shows a magnificent ginger tabby cat making friends with five Golden retrievers after receiving lots of kisses from the dogs. On a patio chair, Giuseppe the orange cat was resting when several Golden Retriever puppies began kissing him all over. Giuseppe sat calmly and seemed unbothered by the dogs in Alessandria, Italy, as he continued to enjoy his newfound friendship with the puppies. 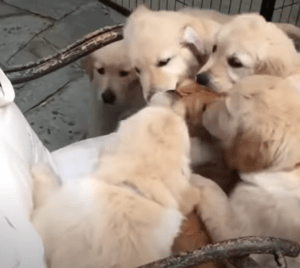 The surprising friendship between the kitten and the 5 puppies is likely to last because, despite cats and dogs traditionally not getting along, they may get along “quite well” if cared for under the right conditions, according to animal charity the Blue Cross. Even though cats and dogs are typically portrayed as rivals, it’s all about how the two animals are presented and how they can live together. 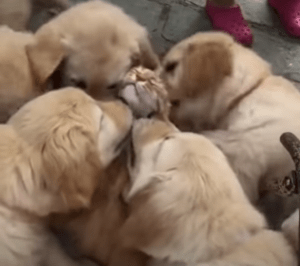 If either pet—or both—have previously shared a household, the introduction procedure is often made much simpler. It is still a good idea to move slowly, though. A slow introduction, in the opinion of experts, is much safer than a quick one and will hopefully result in both pets becoming close friends, like Giuseppe and the Retrievers. Because first impressions matter, this guideline should apply to both cats and dogs and people. 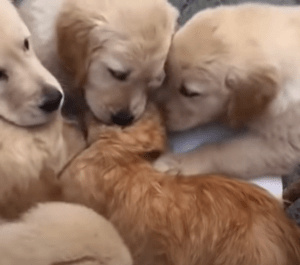 Make sure the cat can always quickly get back to its “secure place.” If your dog gets excited easily, first meetings are best held after exercise when they are more likely to go easily. According to trainer Mikkel Becker, who focuses on reward-based training and behavior modification for dogs and cats, it’s important to start the process by focusing on the dog rather than the cat, which can occasionally be the more demanding animal. 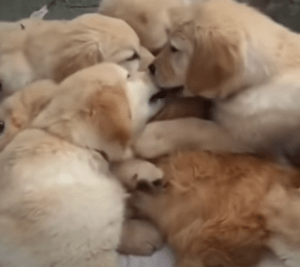 Dogs who are exposed to cats during their primary socialization period, from about two to nine weeks of age, are more likely to feel comfortable near cats as adults. Breeds with less predatory tendencies might also be less likely to go after a cat.