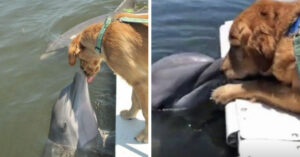 Like most Golden Retrievers, Gunner is adorable, friendly, and loves to make new friends. Unlike most dogs, however, Gunner’s best friend is a dolphin named Delta.

Their friendship is so adorable and pure, and they don’t mind that they’re quite a miss-matched pair, to say the least.

You see, Gunner happens to be a golden retriever, and Delta is a dolphin! 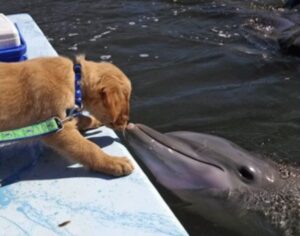 Delta lives at the Dolphin Research Centre in Florida, which is where the pair first met.

The pair have been best friends ever since, and recently, a picture of the two cuties went viral on Twitter. 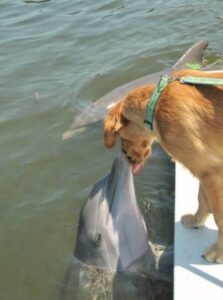 Their unexpected friendship has completely melted everyone’s hearts, and people are extra smitten by the fact that they like to give each other little kisses. 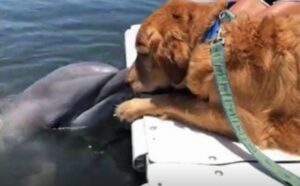 Delta presents his pointy little nose for some puppy kisses, and Gunner happily licks his BFF and shows how much he loves this strange-looking water-puppy.

The two friends are so ridiculously cute together, and we just can’t get over how magical their friendship is.

I think we could all learn a thing or two from Gunner and Delta! We should love all of God’s children, no matter how different they look or where they came from.