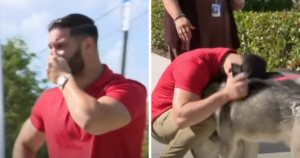 There are times in our lives when the unexpected occurs, and it feels as if the universe has led us to a specific location for a reason. It’s hard to put some things down to “coincidence.” There were just too many variables, almost missed opportunities, and chances that didn’t happen! For one man in Miami, it probably felt like someone upstairs was looking out for him. After losing his two pets, a Miami man experienced this firsthand when he happened to be in the right location at the right moment. 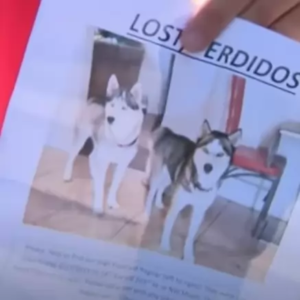 They both leaped off the fence and ran away from the backyard. If you know anything about huskies, you’re aware of their incredible speed. They leaped the fence and immediately went into an exploratory mode. 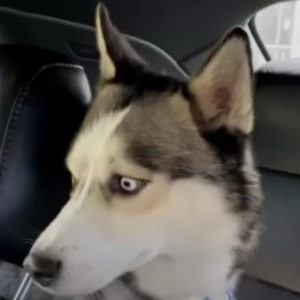 Dogs can become lost in their thoughts! According to Pet Hub, most dogs do not intend to run away from home or abandon you. When they realize they’ve put themselves into a dangerous situation and can’t find their owner, they may panic. It’s usually just a case of innate canine behavior, when the need to investigate takes precedence over all other considerations, including obedience training and fear of punishment.

Regardless, it’s critical to begin searching right away. He was out distributing flyers in the hopes of finding his dearest pals. He went to the local animal shelter after receiving a tip. It was a crucial moment that was captured on camera when he arrived! A few days after Sandy lost his pets, Ocean Drive Magazine was performing a photoshoot at a nearby shelter.

The event was arranged to raise awareness of the city’s strays and rescues in the hopes of encouraging people to adopt. Photographers were brought in to snap images of the dogs and give them some exposure, which could help them find homes. While the group was outside, they decided to photograph a stunning couple of huskies who had lately been discovered. 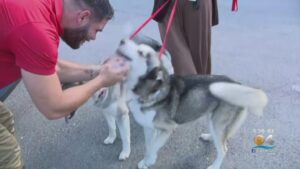 The Huskies had brilliant blue eyes and would look fantastic on the top page of a magazine or website! The photographer began taking pictures while a volunteer held the dogs. The dogs appeared to be in their world, simply hanging out and taking in the scenery.

Sandy had received a tip and had arrived at the shelter just as his dogs were being walked down the front sidewalk! “Those are my pets!” he exclaims in a loud voice. Sandy then sprints to find his missing puppies.
He simply grabbed them into a great hug when he reached them. 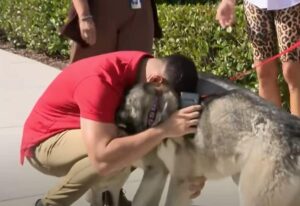 The heartwarming reunion was caught on camera. The crew and the pet adoption workers were happy to see the man reunite with his lost dogs and comforted him.

It’s a very happy ending, but after that ordeal Sandy isn’t going to take a chance on losing his pets again: he says he plans on getting them microchipped first thing so they’ll be able to identify him as the owner.

Ragnar and Cloud, the pups, were overjoyed to see their father again. Sandy’s reunion with his two beloved dogs seemed to be dictated by fate and the universe.

Check out the emotional video below!