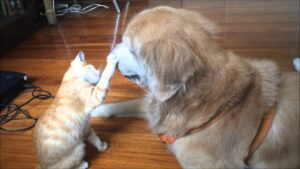 With this little kitten, the owners received a lot more than they bargained for.
Long before they were domesticated animals, cats and dogs developed their enduring antagonism. According to research from the University of Sao Paulo and the University of Lausanne in Switzerland, cats and dogs were already choking one other over food around 20 million years ago.

Numerous cartoons and television programs featuring these two animals in perpetual combat have been inspired by this long-standing enmity.

Today, after much time has passed, it appears that a truce has been achieved.

For a ginger kitten that was saved by her devoted family, it would appear that way. When Koda was brought home, he was just a month old. This tiny furry creature, which could fit in the palm of his owner’s hand, made an instant buddy in Keelo, an adult Golden Retriever.

Young Koda will play around and around and even on Keelo, the gentle giant, who is attempting to sleep, like a child to a father or a little brother to his big brother. Without a doubt, Keelo is unbothered.

Koda will cuddle and snooze until Keelo shows him love. The little ginger even makes an effort at what appears to be a kiss! 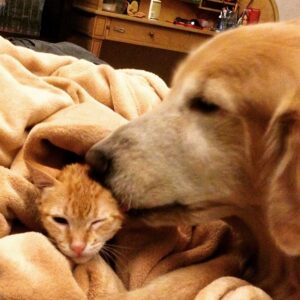 And what about when you’re playing?

Given the enormous gap, you might expect Koda to back away from the challenge, but he didn’t. Koda is spirited. This little one has already lived nine furry lives, after all! Go for it,

They fight like cats and dogs, which is a cliche that these two redefine.

Just picture how kind giant Keelo must be! He must have an enormous amount of love inside his fuzzy heart to avoid accidentally squashing Koda. The affection these two share for one another is undeniable.

supposed to be sworn enemies for life? Nowhere near.

Watch their adorable friendship below. It will melt your heart in a puddle.