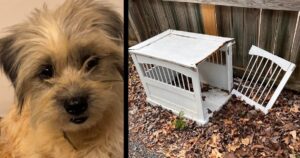 Building his own clinic was something that Dr. Harshivinderjit Bains was doing. He observed a small white dog during the construction phase that appeared wary of people. A nearby graveyard had been discovered to be home to this stray dog.

Dr. Bains wanted to give her a good scratch behind the ears, but she avoided him—and most anyone, for that matter—and stayed to herself. Making a home among the dead, concealed by tombstones and the silence, was the only place she felt secure.

The doctor hoped to tame the dog and provide her with a loving home despite her wary appearance. But he made the decision to build trust gradually, starting small. While the clinic was being built, he provided her with food, water, soft blankets, and a comfortable place to stay.

Dr. Bains thought it was time to capture this solitary little puppy and bring her inside as the days grew shorter and colder. He intended to integrate her into his family. You won’t believe what transpired next, though. A microchip was found when the doctor brought this adorable young girl to the veterinarian. Her parents were informed after a few phone calls.

Truvy had a microchip, which Cindy Nash of Nicholas Pet Haven discovered while assisting Dr. Bain in rescuing her. Later, they discovered how she ended there alone and told the remarkable year-long adventure of this stray dog living in a graveyard.

She moved to a new town and ended up getting lost after squeezing through a fence. The relatives of Truvy had given up on ever finding her. She had been missing for about a year.

Truvy was initially uneasy and concerned about the strangers that received her at the clinic, but after a short while, their recognizable smells and tones helped her recognize them!

WATCH: Lost Dog Brought Back To Owner After Living In Cemetery For A Year