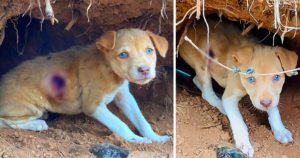 Someone informed Kokkachi Shelter about a small puppy wounded around his stomach, so the volunteers team went there and checked at that time he was outside the cave but they doesn’t had anything in their hands to caught him.

So they returned to the shelter and obtained all necessary supplies such as cloth, milk, and a bag. The team returned by the time he entered the cave and did not come out. Someone placed a bowl of milk outside the cave and waited a few hours

After few hours he came outside the cave,by the time they closed the cave with a wooden blocks. And caught the puppy, wrapped it in a cloth, and took him to a veterinary clinic in Calicut.

The rescue operation was very hard, he always was going inside each time they tried to catch him. The cave was very big so it took a while to catch him.
Unfortunately the veterinary hospitals were not opened as it was a holiday. Finally they found a gentle doctor who accept to treat him, Dr shihabudheen he did all treatement without paying any thing.

They took the puppy to Kokkachi’s shelter after treatement. “And he will be a member of the Kokkachi family.”

The puppy recovered quickly and is full of energy. From the time they saw him, the entire shelter staff fell in love with him. He has stunning eyes

The Puppy is now in good health and enjoys every moment with his human friends, but the sweet puppy still requires a forever family …