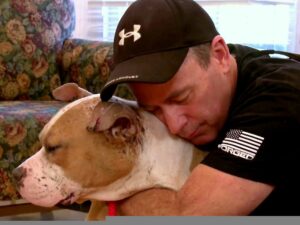 Back when the dog was still in the shelter, deputy Trevor Reeves formed a close bond with a homeless Pit Pull named Stevie Wonder. Due to a degenerative eye ailment, Stevie was losing his sight, and Deputy Reeves would spend hours taking care of the sweet youngster. The deputy was glad to learn that Stevie’s problems had been resolved when he was adopted by a beautiful family. Years later, while working in a different city, Deputy Reeves learned the most terrible news: Stevie had been brutally mauled by several dogs. After the tragedy, his family was left with emotional distress and decided to give him away. At that point, Deputy Reeves pleaded with a trusted friend to take care of Stevie. Deputy Reeves visits Stevie after Stevie survived the attack, and in this video, we see him arrive in town. Stevie feels the presence of his old friend and rushes over to give him a cuddle, even though he’s not sure if the blind dog still knows him. Deputy Reeves is sobbing uncontrollably as he holds Stevie’s damaged body close to his broken heart.

Later in the video, as he passionately describes what Stevie means to him, Deputy Reeves’s eyes overflow with hurt. Although Stevie’s journey has been unpredictable, he is finally in good hands. He is making a good recovery in his foster home, and Deputy Reeves will constantly check over him to make sure he leads a fulfilling life. What a unique love connection!

Watch the tear-jerking reunion between these long-lost friends.