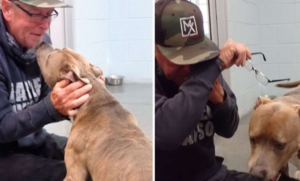 A stray dog named Blue had come up at a stranger’s house searching for a secure place to rest in early April, according to the Washington County Animal Shelter.  The pit bull mix was picked up by an animal control officer and taken back to the shelter.

Blue had been on the streets for an unknown amount of time,  yet he appeared to like every human he met.

Tammy Davis, the shelter’s executive director, told The Dodo, “He was a happy-go-lucky dog.” “At first, he was a little hesitant, and he didn’t like being among all the other dogs, but he was highly friendly to people and very kind to the staff.”

The refuge had to lock its doors to the public because to the COVID-19 outbreak and only accept visitors by appointment. Blue languished in his kennel for months due to the reduced foot traffic, which turned out to be a blessing in disguise.

What a blessing for his father, who never gave up hope of finding him and was eventually reunited with his trusty companion. 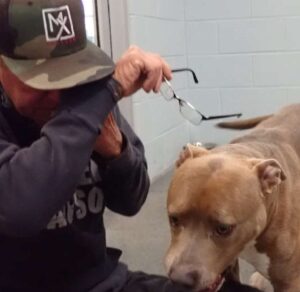 The shelter prepared a video of Blue and placed it on Facebook to introduce him to possible adopters; interestingly, one of the comments read “that’s my dog,” so the only thing left to do was figure out whether the man was telling the truth.

“When we first approached the owner, he answered, ‘Yes, I have images of my dog.’ He provided us photos of Blue at his residence playing with the same blue ball, which was his favorite toy. He was insane.

The ecstatic guy went over 1,200 miles to get his pet; it had been a long time since they had seen each other, and the reunion could not have been more emotional.

“It was clear that the dog and that human had formed a relationship.” For a brief while, Blue was taken aback and wondered aloud, ‘Am I seeing things?’ Then there was only kisses, kisses, kisses.

A happy ending like that would be ideal for all animals,