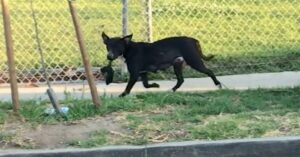 Life for a homeless mother dog can be downright tough. And when puppies are added to the equation,everything becomes a real nightmare.

Not only do they have to worry about desperately seeking a safe haven to protect what they love most, but they often have to endure the indifference of people, and even the inclemency of real human scourges that dare to harm them.

Dogs don’t have the same abillity to communicate what they’re going through or what happened to them, making it more difficult for rescuers to figure out how they might help. 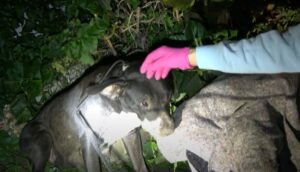 It seemed that it was a young street girl who had just given birth.

It all began when the rescuers received an urgent text message and a video of a mother dog carrying her pup in search of assistance. She was rumored to have given birth on the streets. They rushed straight to the residence of the person who had contacted them, where they discovered a small portion of the house that had been gated to keep the mother dog and her pups in. 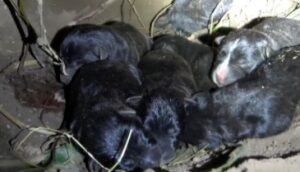 She was too scared to do anything but growl, but deep down she wanted to be helped.

With the help of a trap, they finally managed to lift her out of there. But she did it carefully, making sure not to step on her babies.

The way the mother approached her rescuers made it clear to them that she was a tremendously sweet little dog, and they in turn spoke to her saying that they did not want to hurt her, and that they were there to help her.

They tried to let the mana come out of her hiding spot, but she was very scared. After many attempts, they were able to give her a gentle snare. The dogs and their mama were then all taken to the hospital. Jade, the mama dog, was still worried! That’s when when Eldad Hagar knew that there was something wrong.

That’s when they knew the next day that one of the puppies was taken by a neighbor to raise it. So, they contacted the man, and were able to take the pup back. Thankfully, all the pups along with their mama are fostered by The Little Red Dog till they find forever homes.

They called her Jade because she was like a precious diamond.

Watch the moment this admirable mother is finally reunited with her pup: