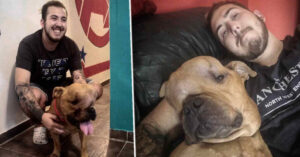 Unconditional love is the greatest gift we can ever give.

A man from Argentina gave a very sick dog the best possible farewell gift after he adopted him so that he could live out his final days with ‘unconditional love’.

This story speaks about Thanos, a poor dog, who was diagnosed with cancer that quickly spread to the head and leaving him with a huge tumor.

Unfortunately, Thanos met 4 different families who refused him because of his cancer. Finally, he ended up with Luciano Karosas, 21, from Berazategui, Argentina, that took the puppy and greeted him with open arms. 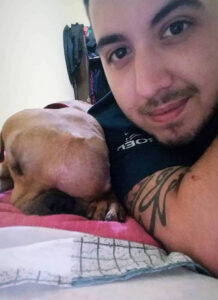 Luciano wanted to take care of the dog in his last days. The hardest thing of having any sick pet is that you know that the time that you will have with it would be so short. 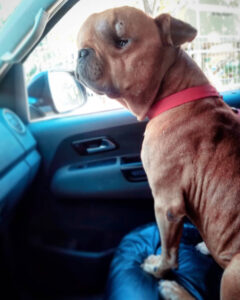 Luciano brought the dog to the veterinarian hoping to get good news, but the vet said no treatment could extend his life.

The news was disappointing and nothing further could be done, Luciano simply decided the two would make what limited-time Thanos had left the most special time possible.

He pampered the dog as much as he could, with Thanos seeming happier than he has ever been, in the short time he was living with Luciano – even playing and snuggling like any other dog.

Unfortunately as expected, Thanos eventually succumbed to the terrible illness and he passed away a little while later.