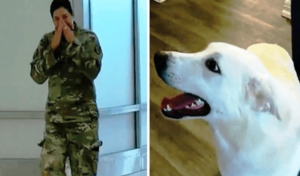 Tracy adopted the puppy and gave her the name Erby.Erby became Tracy’s source of comfort and happiness during difficult times over the next few months, writes ilovemydogsomuch. 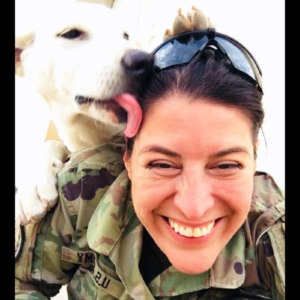 Tracy promised Erby that she would bring her home when her deployment ended.Tracy contacted “Puppy Rescue Mission,” and they organized a fundraiser to pay for Erby’s flight to America.Many strangers contributed to Tracy’s reunion with Erby.Tracy was called for another deployment just as Erby was on her way to her new home. 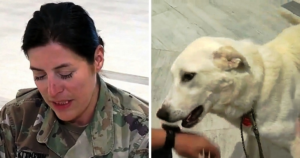 Tracy is seen in this video returning from her recent deployment and waiting to see Erby.Tracy hasn’t seen Erby in seven months, and she knows the puppy has grown in that time.She can only hope that the little sweetie will recognize her and love her once more. 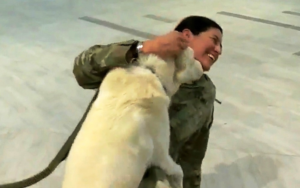 Erby spots Tracy as she walks out of the airport and spontaneously leaps toward her, showering her with cuddles and kisses ! Tracy is overjoyed to see the puppy’s emotional reaction, and she returns her affection with a big hug.