Jessica Williams was impatient to get a dog before her birthday in November. She was very ecstatic! After they moved into their pet-friendly apartment, Jessica’s boyfriend, Jared, finally gave in. Jessica only had a few more months to wait. She couldn’t help herself, though. She only needed to go online to get a sense of what her future puppy might be like.

That was the first time she saw him. She had a dog who needed her right now. Her heart was broken by the saddest little face she had ever seen.

Benji, a stray that was picked up in Los Angeles and taken to a large, loud city shelter, had a sorrowful little face. He was a timid little man who was allergic to fleas and had lost much of his fur as a result. 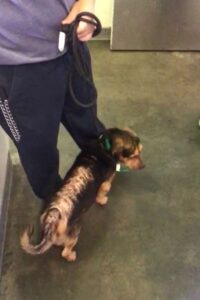 Jessica told The Dodo, “He was at the shelter for ten days and wasn’t handling it well.” “As people walked by, he would snarl and snap at them. I’d never seen a sadder dog, and I knew we couldn’t abandon him.”

They knew Benji needed them, so they decided to drive the 6-hour distance from their Sacremento condominium to Los Angeles.

When the couple arrived at the shelter and informed the workers that they wanted to adopt Benji, they were taken aback. They were well aware that the dog would require a great deal of attention and training. The staff even tried to persuade Jessica and Jared not to adopt Benji, but they refused.

“The shelter also told us he wasn’t sociable and refused to take us into a peaceful waiting area to get to know him because ‘he wouldn’t be a dog that would come over to be cuddly,’” Jessica explained. We were aware that euthanasia was a strong option for him, and we didn’t want him to die.”

The couple’s suspicions were confirmed when they met Benji. Benji would be adopted and welcomed into their small family. They signed the documents and returned home after a long travel.

Benji was frightened during the vehicle ride, but Jessica and Jared knew this was completely natural. When they returned home, though, Benji began acting just as the shelter workers had predicted. He appeared aloof and uninterested in his new paw-rents.

But then, after a few days, something extraordinary occurred. 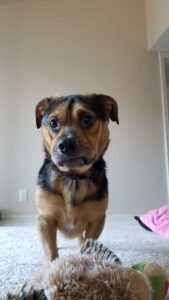 Benji recognized he was no longer in danger. The dog with the saddest little face, the puppy no one wanted, began to PLAY! He began to embrace life rather than merely play!

Jessica stated, “He loves to come up and lick our faces and play with his toys.” “He’s such a knucklehead now!” After a bath, he gets extreme zoomies. He’ll also begin barking as soon as we get in the car, as if to say, ‘We need to get moving!’ ‘Let’s go!’ 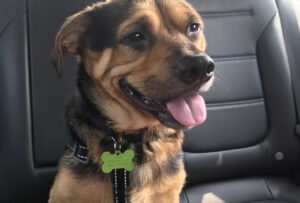 It’s only been three weeks, but Benji has already become an integral part of the family. With Jessica and Jared, he enjoys embarking on new adventures.

Benji’s story serves as a reminder that ALL shelter dogs, regardless of appearance, deserve a shot. A million things can happen once they leave the terrifying shelter atmosphere. Since being given a genuine shot with a genuine family… 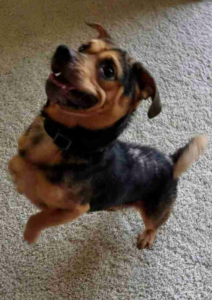