This is the heartwarming moment a heroic dog jumped into a lake, paddled about 200ft off shore and saved a fawn from drowning. But the caring dog did not stopped here. He kept caring for the tiny creature, even after he had taken her out of water.

Ralph Dorn from Virginia went for a walk with his 6-year-old Goldendoodle, Harley. Because there’s a lake not far from their house, Ralph and his furry companion often go there, as it’s a great place for active people to unleash their adventurous spirit. 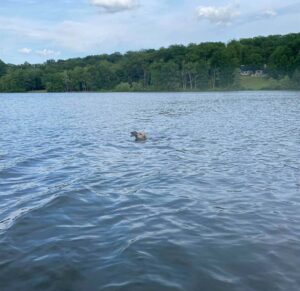 Although Harley loves to explore the places around the lake, he never goes too far from his human. Only this time, all of a sudden the dog has gone and he was nowhere to be found. But only when Ralph looked on the surface of the lake, he spotted his pup. And he was not alone. The ex-marine soon noticed that his dog was carrying another animal. 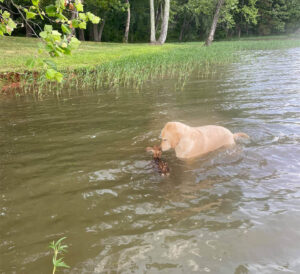 A little fawn found itself in the middle of the lake, unable to return to the shore. It’s impossible to explain how it happened in the first place, but what’s certain is when Harley spotted the baby deer struggling, he jumped into action and saved it. But that’s all because even when he managed to bring the helpless animal to shore, the caring dog still stayed by its side and took care of it. 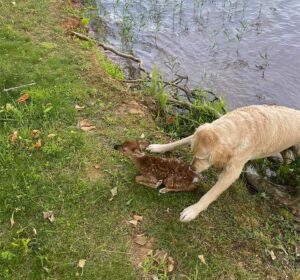 Ralph told People: “Harley didn’t want to leave this fawn. “He just kept interacting with it, licking it, taking care of it. We could immediately tell that, even as a puppy, he had such a good heart. He has always been like that with children and animals. He loves them all.” 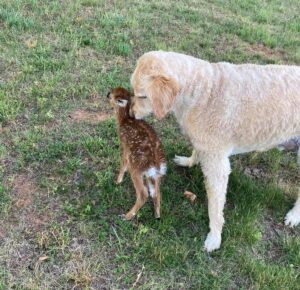 Ralph said he had no idea how the baby deer ended up in the middle of the lake, but he’s very proud his dog managed to save the day in such a way! The proud owner eventually decided to share on Facebook Harley’s heroic act and it immediately went viral with so many people praising the kindhearted dog.

“Not sure how the fawn got out there but Harley obviously didn’t ask why, he just jumped into action,” Ralph wrote in a now viral post. “The little one stopped bleating, tail wagging, they touched noses sniffed each other and Harley came calmly back to the house with me.”

Who wouldn’t love Harley, right ? With his eagerness to help and care for others, he sure is a man’s best friend.