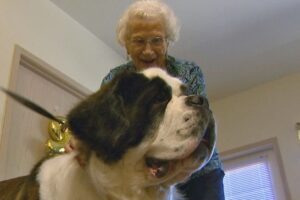 There is only grass between a pair of neighbors’ homes in Mount Vernon; there is no fence or other obstruction. And the motivation behind their decision to “share” their yards is incredibly priceless.

When KOMO News in Washington State heard about this tale, they traveled there to verify it. Brody the Saint Bernard first greeted the crew as they approached the street.
Brody, a two-year-old huge, floppy puppy, is owned by Dave and Edie Mazzarella.

He said, “I had just given him a bath, and I went inside and he was gone.

When they searched the house and couldn’t find the dog, they realized Brody had left the property and gone to the home of their 93-year-old neighbor, Sally Reenhorn.

Sally, who is unmarried, recalls the first time Brody visited her home.

“There was a cute small puppy sleeping by my sliding doors. and small. That was Brody, and he stayed there!

Sally improvised because she didn’t have any sweets to give the kind and inquisitive boy.

“Well, maybe he wants some old bread, I reasoned. He also adored it! You won’t believe it, but he still won’t take dog food from me! All he wants is bread from me!

Brody has been sorely missing his mate, even though Sally is doing well and finding new acquaintances at the facility. He continues to run over to Sally’s house and press his enormous paws against her window four months after she moved out in the hopes that she will show up.

“He felt down. He didn’t know where Sally had gone and was searching for her,” Edie explains.

Dave claims, “He didn’t know any different.” He simply went there every day, but since there were no longer any treats, he would just sit there and doze off on the porch. Therefore, I would have to contact him or pull him back.

Watch the two besties in action in the sweet video below.