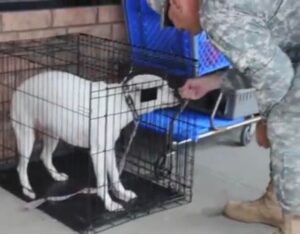 Noelle, a deaf Terrier Mix, was disappointed when her dog dad had to leave her to go on a training trip with the army. Noelle was housed with close friends while her fur dad was abroad, but she was still counting down the seconds until she could see her favorite human once more.

Because they are so passionate about animal care, the family who looked for Noelle while her fur dad was abroad frequently volunteers at their neighborhood PetSmart adoption facility. Noelle was able to accompany the family on every adoption event while she was there and bid farewell to her canine companions as they left for their forever homes. 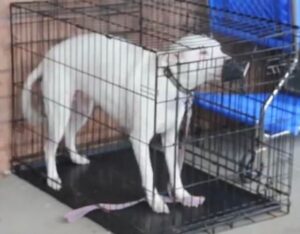 Noelle had grown accustomed to attending adoption events and did not notice anything when she accompanied PetSmart on another journey. However, Noelle was unaware that she was about to get a tremendous surprise.

As she always did during these occasions, Noelle waited calmly in her box and watched as each of the eager puppies left with their new families. It almost seems as though Noelle was thinking about her fur dad, who was far away, and anticipating the day when they would be reunited.

The big surprise started to take shape while Noelle sat there daydreaming in silence. A few days earlier, her furry parent had finished his military training, and now he was on his way to the PetSmart event to see his favorite girl!

Naturally, Noelle didn’t hear her father approaching, but as soon as she saw him, she knew her fantasies had come true! She was eager to jump into her furry father’s arms and shower him with the puppy kisses he had missed while he was away when he got home. 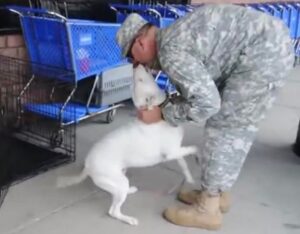 She leapt into her fur dad’s arms and showered him in affection as soon as her crate door was unlocked. Unmistakable eagerness could be heard in her cries, and it was obvious how much they had missed one another.

Every passing shopper stopped to watch their touching reunion because it was so adorable. We have no doubt that Noelle is currently cuddled up with her dog dad, just soaking up every second of love she missed out on during his absence, and we are so happy that they have finally been reunited.