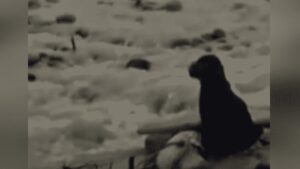 A pregnant, blind dog unintentionally fell into a body of water one day while she was rambling. She was carried away by a strong current until, fortunately, she discovered a pile of trash that she climbed to rest on. 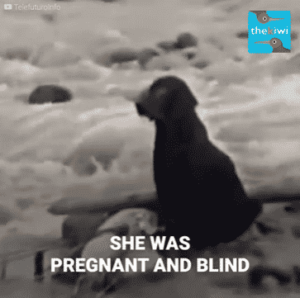 When they heard her cries, nearby police officers had an idea of how to save her. One of them entered the river while holding a safety rope.

A fellow officer swam to save the man because the current was so strong that it caused him to lose his balance and endanger his life. The dog, who was beginning to lose hope, remained motionless.

Unknown man suddenly arrived with his inflatable boat and allowed the boat to take him to where the dog was. He was unarmed and unprotected. 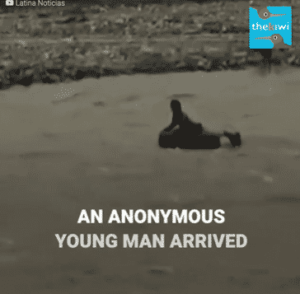 He found the dog and found her to be too scared and nervous. She seemed to have been through a lot and didn’t want anyone to touch her.

The man then petted her for a while. He took the dog and tied a rope around her neck once she was secure enough to do so. The officers then started to pull the dog through the current The dog was successfully saved and was now safe, but she was shivering from the cold. Consequently, the officers took her to the veterinarian, where it was discovered that her only issue was a cold. With time, her body temperature returned to normal..