A dog with a damaged foot was discovered by Stray Rescue of St. Louis. Of course, they intended to rescue,but they had no idea that they would be saving considerably more. ilovemydogsomuch writes.

Soon after rescuing the dog, they noticed that she had milk. That’s when they knew this dog was a new mama and had puppies somewhere nearby.Rescuers knew they had to search for them and act quickly!

They went right to the underbrush where the mama dog was living to see if her pups where there. Rescues pushed branches aside and crawled to bushes until they finally discovered a little den.

Inside the den, a hole in the ground that was like a ‘safe haven,’ were not just a few puppies,but THIRTEEN! Their mama did such a great job hiding them to keep them safe and warm. 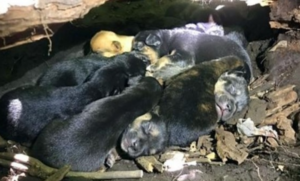 Before returning the pups and their mother to their rescue, rescuers carefully placed them one by one into a container. They were able to provide the mom and puppies all the medical attention they need there. 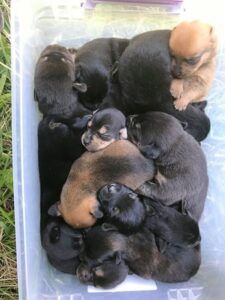 The mom will be undergoing surgery on her injured leg, and all of the puppies will be spayed and neutered and eventually put up for adoption once they are old enough!
In the meantime, Stray Rescue of St. Louis is looking for puppy foster homes. They offer classes, and you can learn more about them by visiting their website.