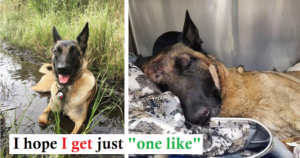 Dogs make such loyal and loving friends. They have keen intuition and constantly step in to help when their owners are in need, even if it puts them in danger.
Like one courageous dog that successfully repelled an oncoming mountain lion and save the life of her owner.
Eva, a 2-and-a-half-year-old Belgian Malinois, is the beloved pet of Erin Wilson of Trinity County, California. The two were were taking a leisurely stroll by the river when the peaceful day quickly descended into a battle for their lives.

A mountain lion leapt at Erin, roaring and scratching through her jacket, according to the Sacramento Bee. With no one else nearby, Erin called on Eva for assistance, and the devoted dog rushed to her aid.


Erin claims Eva boldly engaged the mountain lion, “hitting that creature extremely hard” and distracting the huge cat from Erin. The dog, however, was outmatched, and the mountain lion “latched on to her head,” causing severe suffering. Erin quickly returned the favor, fighting the giant cat with twigs and rocks and soliciting the assistance of a neighboring vehicle, who stopped the attack by shooting the wild animal with pepper spray.


While the mountain lion eventually let Eva go, the dog suffered significant head wounds. Erin told the Sacramento Bee, “She had a couple of puncture wounds in her face.” “And she was simply spewing blood out of her lips.”


Eva was brought to the hospital, and while things appeared bleak, the brave dog survived. Erin set up a GoFundMe page to assist pay for Eva’s medical fees, and she reports that her hero is on the mend, with vets being “optimistic.”


Eva sustained some serious injuries in the process, but she saved her owner’s life. “I believe it’s reasonable to conclude the dog probably saved her life,” said Capt. Patrick Foy of the California Department of Fish and Wildlife.

Erin said on GoFundMe, “My puppy is my hero, and I owe her my life.”