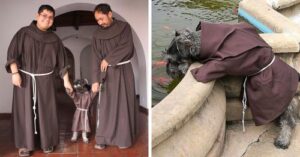 The stray dog who recently joined a St. Francis monastery in Cochabamba, Bolivia is named Friar Bigotón (Friar Moustache). Since the patron saint of animals is known as the founder of the Franciscan order, it was only fitting that the monks offered assistance to the street dog. He is now a content dog who gets to live life to the fullest. The Dodo was informed by fellow friar Jorge Fernandez that “his existence is all about playing and running.” He is greatly adored by all of the brothers in this place. He is a made object by God.

Friar Bigotón even receives a habit to wear. Franciscan Kasper Mariusz Kapro, who first shared these beautiful pictures online, wrote: “[Here’s] Brother Carmelo preaching to the fish.” The dog was seen diligently attending to his monk responsibilities, maybe motivated by his garb.

Local animal rescue Proyecto Narices Fras (Cold Nose Project) stated in a Facebook post that parishioners would surely emulate Friar Bigotón if all the churches in our nation would adopt dogs and treat them with compassion.