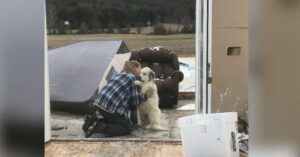 Bruce and Ona Dunlap were watching the Friday night news in their Logan County, Arkansas, home when the cable suddenly went out. The news was warning of an impending EF2 tornado.

Bruce opened the door to check what was happening outside.

According to Julie Moore, a close friend of the couple, “when he stepped outside he told Ona, “It’s awful quiet outdoors and there’s no breeze – there’s nothing out here.” She responded, “Oh, there is. “Go to the storm shelter right away.”

They had no idea that the house would be gone in a matter of minutes. 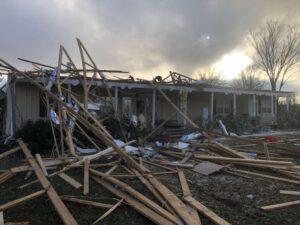 The couple started working right away. Ona hurried to their roommate’s apartment to assist the disabled man in entering the storm shelter. Bruce was looking for the two dogs and four cats that belonged to the couple.

Their dog Dasha wouldn’t go outdoors, and one of the cats, Ladybug, was missing. Bruce was compelled to depart alone. 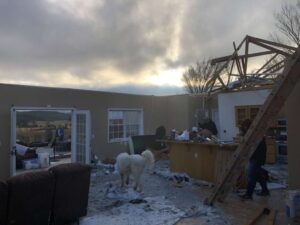 Dasha walked to the kitchen and laid down after sensing something was amiss, according to Moore. Bruce was at a loss for what to do. By the time he arrived at the storm shelter, he was struggling to close the entrance.

When the tornado made landfall, it tore the roof off the Dunlaps’ home and threw objects and debris into the air. It was so dark when they eventually left the shelter that they weren’t even able to distinguish whether portion of the house was still standing. 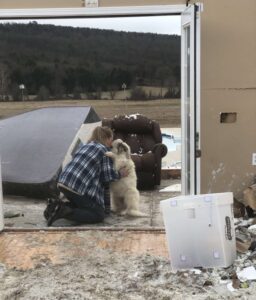 The Dunlaps and a handful of their friends were inspecting the damage the following day when a fluffy face protruded from the rubble. Dasha rushed out and asked, “Why did y’all wait so long?” said Moore. “Ona simply grasped her face and fur and began speaking to her, saying, “I’m sorry. We are present.

Moore took a couple shots of the heartwarming reunion after slipping her phone out of her pocket. Moore remarked that “[Ona] talked to her like a human and Dasha actually responded like a person – they kissed.”

The tornado took so much, but they have each other and that’s what’s important.