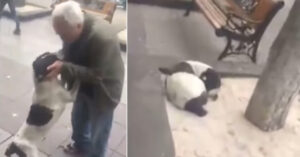 A man in Tbilisi, Georgia had a tearful reunion with his lost dog after finding him on a street. He sees a dog curled up on the sidewalk and as he approaches he calls his name.

The dog looks up and after a pause of a few seconds recognizes his long-lost owner. The dog whimpers and excitedly wags his tail as they hug and reunite.

Someone recounted a touching reunion story:

According to what I understand of the story, the guy had lost his dog three years prior when he received a call from a business owner informing him that a dog that resembled his own was in front of his establishment. I’m not sure how he found out about it; perhaps through some acquaintances. Anyway, he arrived, and as he approaches, he exclaims, “It truly does look like him…The dog’s reaction and how he cries out to him speak for themselves.

What a touching, heartfelt moment to watch.