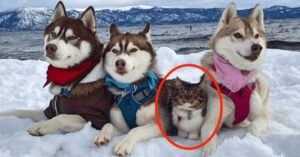 The friendship between a dog and a cat is one of the most adorable.We have presented you with enough stories to prove that dogs and cats can be the best of friends. 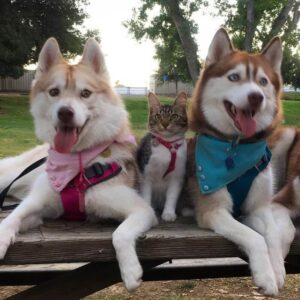 Although there are no dogs that copy cats, many cats like feeling powerful and acting like dogs. In this story, the scenario is similar.
A little, vulnerable kitten by the name of Kozy was once dumped helplessly and bewildered onto the street.
Fortunately, she was saved by a woman who raised three huskies and owned them. Currently an adult cat, Kozy views herself as a large, courageous dog like her “brothers.” 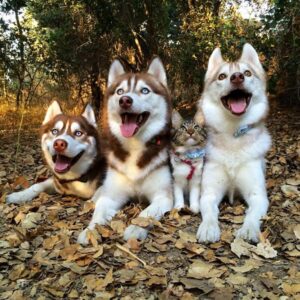 She really feels herself part of this other family.

Due to the fact that they grew up together, it is not shocking.

She loves playing with them, showing her flexible body tricks and just enjoy their company.

Kozy is safe, and maybe the safety that her dog brothers give to her, makes the cat feel much more confident than she is.