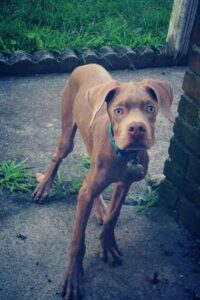 You might have noticed that Murray doesn’t resemble other canines. He is incredibly distinctive. And a large part of what made his family fall madly in love with him was his appearance. Murray’s story now has a happy ending, but for a very, very long time, everything wasn’t looking so good. Murray was born in Puerto Rico, where he contracted distemper and was left for dead on a beach called Dead Dog Beach, which is located on the southeast coast of the island.

A terrible virus called distemper often kills the animals it infects by destroying their nervous and respiratory systems. But Murray pulled through. The fight left him without teeth (making it difficult for him to keep his tongue in his mouth) and with a disfigured head, neither of which do anything to lessen his sweet, loving nature and zeal for life. The Sato Project eventually located and saved Murray, and then brought him to the US for adoption.

But he very nearly wasn’t.

In fact, Murray was about to be put to sleep because of his illness, but the veterinarian had a change of heart when Murray started wagging his tail before the lethal injection could be administered. Murray once more outperformed the odds. He then met the Gallant family, whose love for him was intense and immediate. If you look closely at his face, you’ll notice that his ears aren’t perfectly aligned on his head, and his trademark tongue-out is just the cutest thing ever. According to Mackenzie Gallant, “His quirks make him even cuter and more special.” Murray was initially a foster dog who lived with the Massachusetts family, but they ultimately decided they couldn’t let him go. As a result, they started an Instagram account to help promote rescue dogs and The Sato Project in general.

“We made his Instagram when I left for college for friends and family to follow but over the past year he has gained a lot of followers and helped raise awareness of rescue dogs, The Sato Project and distemper,” Gallant said.