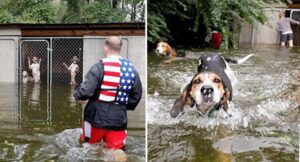 During Hurricane Florence, courageous volunteers in North Carolina found six dogs abandoned in a locked cage. Before help arrived, the dogs were almost drowned in the rising surge waters. They were discovered yapping and scrambling to escape while still resting on their back legs against the pen’s front. The creatures were discovered at a residence in Leland, North Carolina, where the owners had given up the home and the creatures in order to escape Hurricane Florence.

The dogs can be seen whimpering in the videos as volunteer rescuer Ryan Nichols of Longview, Texas wades into the knee-deep water in their direction. The dogs swim out, howling and whimpering, seconds after Nichols opens the chain link fence that had been keeping them in the cage. The rescue workers follow the dogs as they run off into a nearby wooded area. On Sunday, North Carolina experienced four-foot-high flood waters, and they are continuing to rise. According to accuweather.com, flooding in Jonesville near the Yadkin river is expected to peak at 26.6 feet. In North Carolina, the hurricane has already claimed the lives of 12 people.