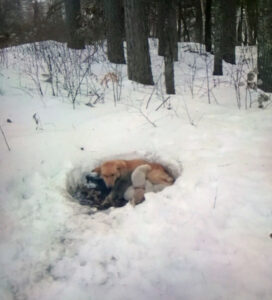 The idea of nature as miraculous lessens as Science develops. But even Science can’t explain all the miracles that occur in nature. The beauty of a mother defending her children is another, and the first is birth. Both of these miracles took place in Snowbelle’s case at once. Her tale is told here. In the Minnesotan state of the United States, Snowbelle and her six puppies were discovered in the snow close to Red Lake. As a result of their body heat, the snow around them melted. Due to Snowbelle’s lack of milk, they were found to be in a very hungry state. When the people discovered that the puppies were already three weeks old, they were shocked and perplexed as to how they had survived in such unfavorable circumstances.

When they were found, they were immediately taken to the neighborhood Red Lake Rosie’s Rescue shelter. In a matter of days, Snowbelle began to produce milk and was able to feed the infants because of the food, heat, roof over their heads, and, most importantly, love. She went through this baptism by cold, and the shelter gave her a new name, Asha, and now she and her snowbirds, as they were called, are on their way to recovery and adoption.

The family huddled up to survive the cold