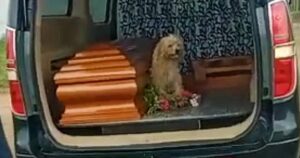 Bumer, a devoted dog, won the hearts of people all over the world with his unwavering love for his owner. Bumer stayed by his 94-year-old human’s side right up until the end! Dogs are unquestionably a unique gift from God. We can learn a lot about true unconditional love from these furry angels. And a devoted dog named Bumer from Ecuador gained worldwide attention for his touching act of devotion to his beloved human, Maria Isabel Benites Chamba.

At the age of 95, Maria Isabel Benites Chamba was laid to rest by family members. Bumer, Maria’s loyal companion, was perhaps the one who was most devastated by the loss. Bumer was by Maria’s side throughout life. The faithful dog continued to be just as devoted after she passed away, showing up at the funeral with everyone else.

“You could see her devotion to and love for her dog. He was always there with his owner, according to a Funeraria Santa Rosa representative. Bumer insisted on going with them when it came time to transport Maria’s coffin to the grave. Before boarding, he circled the hearse as if to signal, “I want to go and say goodbye to my mom,” the spokesperson said. “A fantastic illustration of loyalty. “.

It didn’t take long for the touching act from such a devoted dog to go viral. The heartbreaking pictures moved people all over the world. We are reminded of the value of our furry family and our importance to them by Bumer’s devotion. In a variety of ways, God demonstrates His love for us. And Bumer is just one such example of a committed friend.

“Know well the state of your flocks, and pay attention to your herds” Proverbs 27:23

WATCH: A Loyal Dog Refuses To Leave Dead Owner’s Side