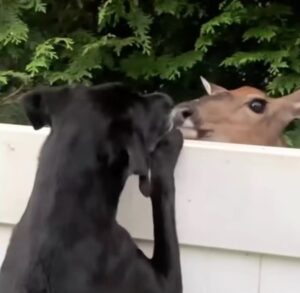 When Holly Faulconer first witnessed a deer attempting to steal seed from her bird feeder, she was mesmerized by the brave little fawn.

But soon Sassafras, the juvenile deer she had named, began appearing for an entirely other reason. She wanted Huey, the dog Faulconer, her new closest buddy, to introduce himself. Huey was saved by Faulconer nine years ago, and the two have been together ever since. Faulconer was surprised when Huey showed symptoms of wanting to get along with Sassafras rather than seeing the curious deer as a threat because he is extremely protective of his mother.
Huey was initially wary and a little bewildered, according to Faulconer. “I would merely speak to them both and ensure that they were secure. They just began conversing slowly over the fence!

When Sassafras arrives, she occasionally brings her two infants along.

It’s really the cutest thing ever, Faulconer added. I enjoy seeing them.

They don’t care if Sassafras and Huey are from different species. Being dependable, kind, and tall enough to communicate over a fence are important.