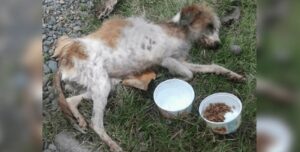 A malnourished dog was discovered imprisoned inside a house in Costa Rica at the beginning of January 2018. Mercedes Mora, a dog enthusiast and member of Charlie’s Angels Animal Rescue – Costa Rica, eventually came across him (CAARCR). She offered him lunch right away and then drove him to the charity.

How he came to be in this situation is still under investigation. He was so frail, according to the rescuers, that he could hardly lift his head. The Dodo quoted CAARCR’s founder, Tania Cappelluti, as saying:

When you rescue animals, you witness a lot and have to cope with a lot of unpleasant situations. I had to keep myself together when I saw this bundle of skin and bones laying in his cage. Leon, regrettably, is among the worst instances I have ever encountered.
Because Cappelluti wished to give him lion strength, he was given the name Leon. His condition “took [her] breath away,” she claimed.

As soon as Leon started to show signs of recovery, the name ended up being very appropriate. As Cappelluti stated: Leon wants to live, so when our veterinarian put food in his bowl, he lifted his head and became very excited, ate everything, and even licked the bowl clean. A fighter, he is. Leon was anemic, though, and needed more than just food and care to fully recover, as the vets soon discovered. Rottweiler Norman stepped in to help in this situation. In an effort to locate a blood donor dog, the charity posted on several regional Facebook pages. A healthy dog that was at least 25 kilos (55 pounds) in weight was required. Two people quickly made contact, but sadly they were located too far away. Then, Cappelluti remembered that Jose Lobo had a dog named Norman who might be a good match for Leon and gave him a call. When Lobo realized Norman was healthy enough to give blood, he immediately abandoned all of his plans and brought him to the veterinarian. Cappelluti noted that Norman “was very calm throughout the entire procedure.”. But his father nearly collapsed, I heard.

Lobo said to The Dodo:. I stayed with Norman the entire time, but I had to leave the room when I saw all the blood, even though he was the perfect donor. But Norman was incredibly courageous and laid-back. “It’s all good, dude, don’t worry, let’s do this!” appeared to be the thought running through [his] mind. All of Norman’s efforts for Leon have made his family incredibly proud. Even more, Cappelluti brought gifts as thanks, including a pink tennis ball that he has grown to love.

Veterinarians claim that Leon is making progress toward recovery and that once he is well enough, he will be made available for adoption.