Spencer and his brother, Rocky, shared a special friendship for ten years and lived happily with their family. According to their owner, Beth Fisher,Rocky and Spencer were best friends.

They did everything together. The two ate from the same bowl and slept in the same bed. They were absolutely inseparable. Fisher told The Dodo that they never spent the night apart.

Unfortunately, their friendship came to an end when a visit to the vet revealed some sad news.

The blonde dog, Rocky,had developed a large cancerous tumor inside of him. The tragic discovery was made too late, so it left only one treatment option.

“Rocky had to get put down that day,” Fisher said. “It was hard to process Rocky’s sudden death, but we can’t imagine how hard it must be for Spencer to have lost his little brother.” “Since Rocky passed, Spencer has been getting up in the night to wander the house looking for his brother,” Fisher said. “And then he starts crying because he can’t find him.” The family decided that they had to do something to help Spencer cope. 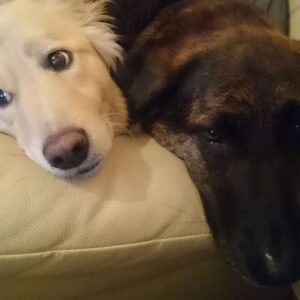 So, they had a personalized pillow made with Rocky’s face printed on it, and it has definitely helped comfort Rocky since his brother’s passing. Now, Spencer sleeps with the pillow as if he were sleeping with his brother again.

Today, Spencer brings the pillow with him everywhere and cuddles with it all day. He is still mourning Rocky’s loss. However, the pillow of Rocky’s face has helped Spencer grief. 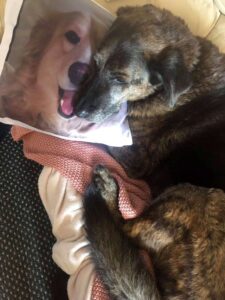